Paulii Buster has invested tens of thousands of dollars to turn a vacate space on Sanford Avenue into a sleek, modern Belgium beer pub that regularly draws customers from outside of Sanford — including players from the Orlando City Soccer Club.

When the city of Sanford’s Downtown Waterfront Community Redevelopment Agency (CRA) announced it would spend $2.5 million to reconstruct Sanford Avenue to upgrade utilities, widen sidewalks, and enhance lighting and landscaping, Buster knew his business, Buster’s Bistro, would suffer and he made plans to mitigate the construction.

He never thought the work would virtually shut off access to his pub. 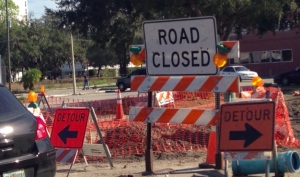 “We were told from the beginning that at least one lane would remain open throughout construction,” says Buster. The closure will not only curtail traffic, he says, but the blockades on side streets will severely limit parking for those customers who actually overcome the traffic obstacles.

The city’s project manager, Robert Beall says the construction plan always called for closing the street. However, CRA Chairwoman Maria Shreve says she never thought the street would be closed for extended periods of time. Neither did Sanford Economic Development Director Bob Turk.

What we’ve got here is failure to communicate.

From the earliest stages, this project has been riddled with miscommunication. The city put the project out for bid twice because of problems with the original bid process. Once the bid was awarded, the contractor, Stage Door II Inc., waited more than 30 days to begin work.

The company thought the city’s Sept. 3, 2013 groundbreaking ceremony was the actual start date, despite receiving a notice to proceed on July 31. Why city staff failed to notice that Stage Door II was not mobilizing heavy equipment for more than a month is a mystery.

Then in January, city staff asked City Commission to approve about $150,000 in change orders for the project because some key utility items had not been included in the published bid request. Paul Moore, the city’s utility director, included the items in his scope of work for the project and even set aside money in his budget to pay the contractor, but the city purchasing department failed to put that information in the bid package.

At the same January meeting, staff asked the commission to extend Stage Door II’s deadline from April 3 until the first part of June, in part because the contractor did not start on time. Even then the project won’t be completed. Beall says the company has been granted an additional 38-day extension because of unforeseen problems — unmarked and abandoned utilities, for example. So realistically the project won’t be complete until the middle of July, or maybe later if Stage Door II accrues more extension days.

Adding to the city’s blunders is the fact that Stage Door II has had three different project superintendents on the job — including one whose background is residential construction. It’s a wonder any progress has been made at all.

At this point, the screw-ups can’t be undone, and it’s likely that the four months of road closures can’t be avoided. That does not give the city a pass, however, to continue to bumble through the rest of this project at the expense of the business owners on Sanford Avenue. City Manager Norton Bonaparte and the CRA should take the following actions:

These, of course, are starting points. The city manager and CRA members are welcome to think of other ways to help these businesses. Shreve, for one, is adamant about taking some action.

“We’ve got to do what we can to help those businesses,” she says.

Paulii Buster is optimistic the city will get its act together. I’m not sure why. As if he doesn’t have enough issues, the city’s code enforcement department recently threatened to fine Buster because he hung a Belgium flag in front of his business to attract customers during the construction.

Somebody at city hall needs to fix this. Now.