Allegiant Air may be headquartered in Las Vegas, but it’s Sanford that is the low cost airline’s No. 1 airport.

Allegiant’s presence at the Sanford airport has made a drastic change at the former Naval Air Station. After the federal government turned the property over to the city of Sanford in the late 1960s, the airport was primarily a general aviation facility used by airplane enthusiasts.

In the mid 1990s foreign charters, almost exclusively from Britain, accounted for nearly all passengers at Sanford’s airport. Prior to the global financial crash in 2008 and the collapse of foreign currencies versus the dollar, international passengers traveling through the airport numbered just over 900,000. Meanwhile, domestic passengers had grown to 800,000. (Monthly report December 2007)

Through the first quarter of 2015, 558,000 domestic passengers have used Sanford’s airport. That is an 9.8% increase over the same period last year.  (Monthly report March 2015)

All of this is a feather in Sanford’s cap, but what does it really mean? It’s great to be Allegiant’s No. 1 airport, but how does that make Sanford better?

What about all those landing fees and other  taxes tacked onto the price of an airline ticket? Surely Sanford gets a piece of that money, right? Ha! Sanford Airport Authority (SAA) President and CEO Larry Dale is quick to point out that that money must be spent on airport operations as per federal regulations.

The airport does provide lots of jobs, and there are a number of businesses located on the airport’s industrial property that provide additional jobs and taxes. 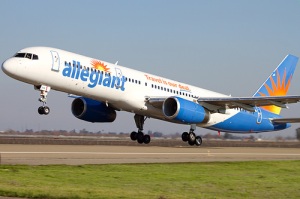 The airport also raises Sanford’s profile. For instance, a friend of mine in Lakeland says her friends know Sanford almost exclusively because of the airport. For a city that has struggled with its image, that’s positive publicity we could use.

The question remains: Is the airport being maximized to the city’s benefit?

In my mind no, not by a long shot.

For starters, the airport is city property, yet the Sanford Airport Authority pays no lease. Imagine what services could be provided – or property taxes cut – if the SAA  began making a $1 million annual lease payment.

What about those 2 million+ passengers traveling to and from Sanford? Is enough being done to capture those people, and more importantly their money, to benefit Sanford’s economy?

Again, the answer is no.

While many of those flying into Sanford are coming for Disney and the tourist attractions, there are opportunities to boost the local economy. The airport must begin doing more.

This is not an indictment against Dale. He and his private sector partner Larry Goldthorpe (Sanford’s airport is operated by a public-private partnership between the airport authority and ADC & HAS Airports Worldwide) have done a tremendous job building the airport into what it is today.

With Dale scheduled to retire in September (Larry Dale to retire as airport CEO), the airport authority has an opportunity to hire a leader who can not only continue the airport’s growth and importance to the traveling public, but one who can ensure this city of Sanford asset is used to its maximum potential to benefit the citizens of Sanford.

If you’re interested in expressing your thoughts on the issue, here is a list of board members so you can contact them. Messages can be left at the SAA office at 407-585-4000.