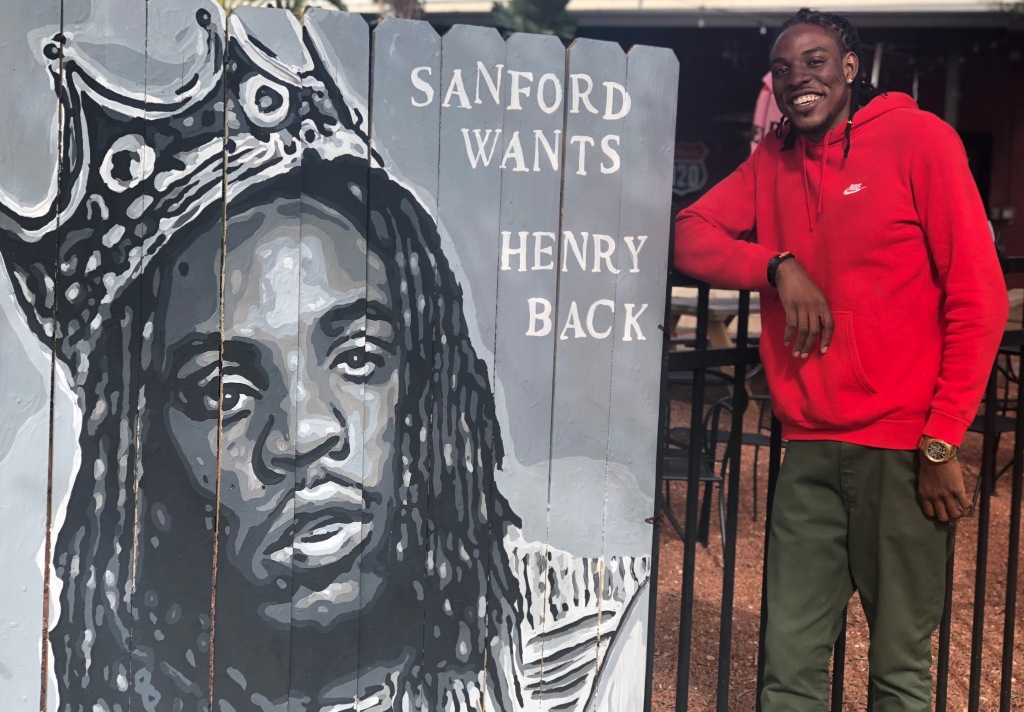 One of Sanford’s favorite sons, Henry Dorvil, starts off 2018 a lot better than he did 2017 because he’s home in Sanford.

After all, when I interviewed him he’d been back in Central Florida for barely 144 hours after spending 54 weeks living in Haiti without electricity or running water.

So what was the first thing that caused the 24-year-old millennial realize he was really home?

“I looked at my phone, and I had wi-fi service,” he said with his charmingly broad smile. “In Haiti, I couldn’t always get a signal, so to actually have wi-fi on my phone is unbelievable.”

To celebrate Henry’s return, there will be a “Love On and Hug On” event starting at 6 p.m. tonight (Thursday, Jan. 11). As a part of Alive After 5.

Henry, who’s lived in the U.S. since he was 6 months old, spent the last year without wi-fi in Haiti as he tried to straighten out his immigration status. (Story)

He found out in early October his appeal for an expedited hearing was approved , after 10 months of back-and-forth with immigration officials. At the time, he ask me not to publish the news because the time between the decision to fast-track his hearing and an actual decision on his status could take many months. He didn’t want to get anybody’s hopes up that he would be home soon.

He also told me that he planned to take the first plane out of Haiti once he had his visa in hand.

Weeks passed, then finally on Dec. 28 he was told to come pick up his visa. On the Dec. 29 he picked up his visa, and on Dec. 30 he was flying back to Orlando.

“It all happened so fast, it was hard to comprehend it all,” said Henry.

When you spend a year walking a mile to get fresh water, rereading the same books because there’s not very many close by, and paying a local entrepreneur $1 to charge your phone on a small solar panel, it can be a little overwhelming to drink a glass of clean water from the kitchen spigot or surf the internet at leisure.

The thing he missed the most during that time? Good Vibes Television.

“Of course I missed my mom and friends and family, but honestly the one thing that was the hardest part was not being able to grow Good Vibes, my video production company,” said Henry. “I spent a lot of time filling my notebook with ideas for ways to do that.”

Good Vibes is not just the name of his company, it’s the essence of Henry’s personality. No matter the situation, he’s always had a positive outlook, even in Haiti.

“I just tried to surround myself with positive things. I couldn’t let anything negative creep in,” said Henry. “Every day I was in Haiti, I said ‘Tomorrow is the day I’m going home.’ ”

“Even though I knew I wasn’t going home, I had to trick my mind into thinking that tomorrow was the day,” Henry said.

“I had a village behind me,” said Henry. “Those letters really did help. It showed that I had something to come back to, that people wanted me back and I was a part of the community.”

In fact, Henry said that staffers for U.S. Senator Marco Rubio were impressed with the letters and news coverage His case generated.

“There are guys in Haiti in my exact same situation who have been there a lot longer than I was, and they still don’t when they’re going home,” Henry said. “Believe it or not, they say my case went really fast, although it didn’t seem very fast to me.

“There’s no doubt in my mind that everything people in Sanford did for me helped.”

The first priority for Henry is to find a job. That shouldn’t be hard since he at once held 4 different jobs at the same time, while also starting his video production company,

Henry is back home on a work visa. The next step will be to gain his residency classification, and within 5 years he go through the citizenship process.

“The idea of having to take the citizenship test is kind of funny, since until the last year, the only thing I knew was living in America,” Henry laughed. “I took all the history classes in high school, but I’m not going to take a chance. I’m going to study extra hard.”

It’s not lost on Henry that he returned home at New Years. Haiti gained it’s independence from France on Jan. 1, 1804. Just a mere 214 years later, Henry gained his own sort of independence.

“This time of year will always be very special to me.”

iThere are no comments