Outdoor seating could be in restaurant’s future

Long before trendy restaurants from Orlando began locating in downtown Sanford, there was fried chicken Thursday at the Colonial Room.

The nearly 40-year tradition has come to an end – at least temporarily.

The building at 115 E. 1st St., where the Colonial Room called home, was recently sold to a man who wants to relocate his Greek restaurant from Debary to downtown Sanford.

For a while it looked like the Colonial Room would close for good, however owner Michelle Simoneaux found a space to relocate the restaurant just four doors to the west  at 105 E. 1st St. The restaurant will occupy the western half of the old McCrory’s 5 & 10¢ store.

“I really wanted to stay in downtown Sanford, and thankfully we’ll be able to,” said Simoneaux.

Sunday, June 28 was the last day of operation for the Colonial Room before the move. 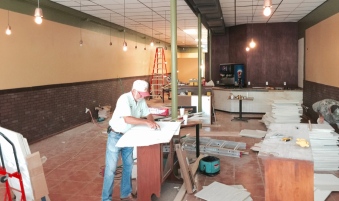 Looking north toward the front door at the Colonial Room’s original location at 115 E. 1st St. 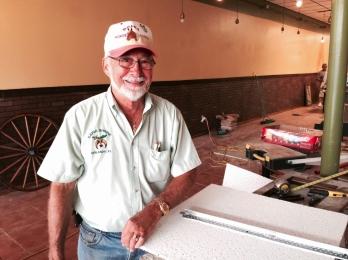 Bill Painter lends a hand in helping remodel the Colonial Room’s new space. Painter owned the restaurant for 34 years before selling it to Michelle Simoneaux in 2012.

“It’s bittersweet,” said Simoneaux. “I have worked in this building for 25 years.”

Simoneaux expects to have everything moved and the renovations done at the new location in about a week. However, it may be mid-July before the restaurant reopens.

“Because we will be in a new location, we had to get all new state licenses,” said Simoneaux. “As soon as we get all of the licensing taken care of, we’ll be ready to open.

Bill Painter bought the Colonial Room in 1977 and soon after began frying chickens every Thursday as a way to attract more business, particularly in the evenings.

In 1992, hungry downtowner’s no longer had to walk through the drugstore to get to the restaurant, as the Colonial Room finally got its own entrance on 1st Street. A few years later Touchton’s Drugs closed for good.

Painter sold the restaurant to two brothers on February 14, 2011. Business declined sharply, perhaps in part because the new owners eighty-sixed fried chicken Thursday, and Painter took the restaurant back about a year later. After 22 years as a Colonial Room employee, Simoneaux bought the restaurant from Painter in October 2012.

Business has returned, and so has the fried chicken. Simoneaux said she is excited about moving into the new location. Once open, she hopes to get approval from the city to remove several large windows and remodel the front of the building to allow for a small outdoor area.

“That’s down the road, first we have to get open and start doing business again,” said Simoneaux.